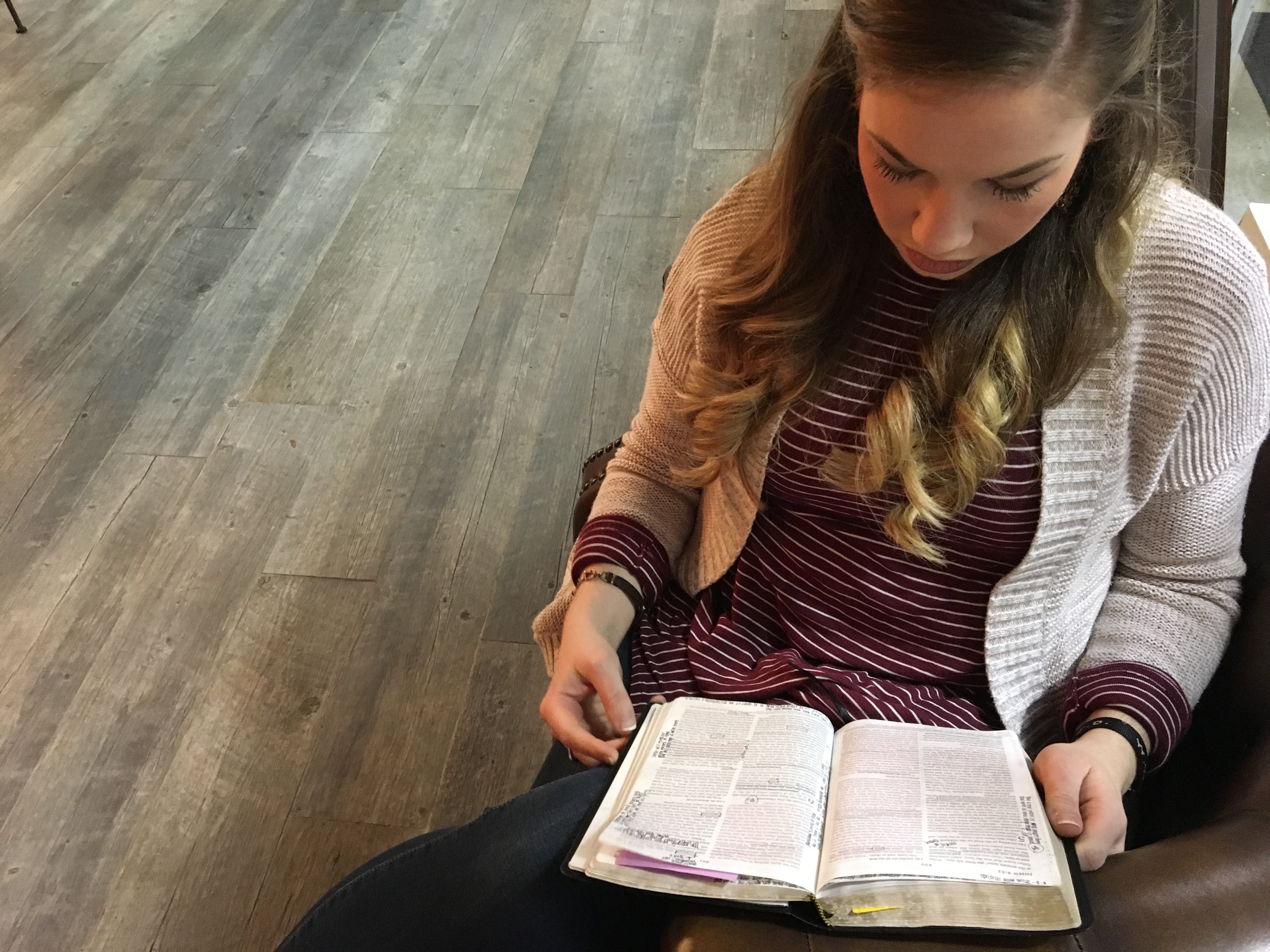 The other night I was reading in John 6, this is the chapter where Jesus feeds 5000 men. It’s also the story I’ve been able to recite since pre-school. My Sunday school teacher would pass out these little felt characters and as she got to a certain point in the story, each kid would place their character–Jesus, the 12 disciples, the crowd of people, and the little boy with the 5 loaves of bread and 2 fish–up on a felt board. It’s a story I’ve heard so many times (and I hate to say this, but it’s the sinful bent of my heart); it has become mundane.

Pretty sure God is teaching me there is beauty in the mundane, rehearsed stories because just as God usually does, He pointed out something new.

Check out what John 6:1-14 says and just try and S L O W down as you read this. Picture the felt Sunday school board with all the little characters, but don’t stop there. These are real people who have a R E A L hunger.

1 After this Jesus went away to the other side of the Sea of Galilee, which is the Sea of Tiberias. 2 And a large crowd was following him, because they saw the signs that he was doing on the sick. 3 Jesus went up on the mountain, and there he sat down with his disciples. 4 Now the Passover, the feast of the Jews, was at hand. 5 Lifting up his eyes, then, and seeing that a large crowd was coming toward him, Jesus said to Philip, “Where are we to buy bread, so that these people may eat?” 6 He said this to test him, for he himself knew what he would do. 7 Philip answered him, “Two hundred denarii worth of bread would not be enough for each of them to get a little.” 8 One of his disciples, Andrew, Simon Peter’s brother, said to him, 9 “There is a boy here who has five barley loaves and two fish, but what are they for so many?” 10 Jesus said, “Have the people sit down.” Now there was much grass in the place. So the men sat down, about five thousand in number. 11 Jesus then took the loaves, and when he had given thanks, he distributed them to those who were seated. So also the fish, as much as they wanted. 12 And when they had eaten their fill, he told his disciples, “Gather up the leftover fragments, that nothing may be lost.” 13 So they gathered them up and filled twelve baskets with fragments from the five barley loaves left by those who had eaten. 14 When the people saw the sign that he had done, they said, “This is indeed the Prophet who is to come into the world!”

Here’s where God showed me something new: verse eleven talks about how Jesus took the loaves, gave thanks, passed them out, took the fish, gave thanks again, and passed it out. But look at that last part, as much as they wanted.

I laugh a little when I think about this story because I often go over to a family’s house after church on Sunday. Usually, my Sunday breakfast is coffee (that’s not really food). So by the time 12:30 or 1 or 1:30 rolls around, I’m pretty hungry. According to them though, I go through these phases of hunger that leads to “hangry” (hunger that turns into anger). Although I like to think I’m not angry, apparently the sass does start to roll out.

And I often wonder if this is like the crowd following Jesus. This crowd had been following Him while He was performing all these signs and wonders, and they got hungry–maybe even “hangry.”

But regardless, Jesus provided.

He didn’t just provide enough food though, He provided as much as they wanted.

That’s crazy to me.

People are people, so I’m guessing even though this story happened thousands of years ago there were still those three main types of people:

I can only imagine what Jesus, our host of this impromptu dinner party, was thinking when He saw those belt looseners chowing down on the food He provided and told them to have as much as you want. OR when He looks over to those who are just right. I’m sure He was smiling like any proud host of a dinner party, when you see your guests satisfied in what you’ve prepared for them.

But then He turns and He sees the picky eaters making the choice not to partake in the dinner because they would rather have something else (probably not as fulfilling) leaving them empty, unsatisfied, and “hangry”. I can imagine He felt some sadness when they opted not to eat, when He could see so clearly they were hungry. Jesus had provided the food to take away their hungry and yet they chose not to eat.

Is this not us today?

We’ve been given Jesus and He’s giving us as much as we want, but He leaves us with the choice to partake.

How much Jesus will you take?

He’s giving us all we want to the point where there will always be leftovers (or more of Him to have), yet some of us–including myself–are choosing a different brand of Jesus, a false god in essence, to satisfy our deep hunger.

Choosing the false god only leaves us empty and unsatisfied.

When I came to this story, I didn’t really expect God to reveal anything new to me because like I said I knew it (or at least thought I did), but little did I know that God really just wanted to ask me a question: I am here offering you as much of me as you want, but will you choose to be satisfied?

We have a choice.

We can be a “belt loosener” and completely satisfy our soul’s hunger in Christ–enjoying every minute of experiencing Him to the absolute fullest, to the point that it spills out of us into others.

We can be “just right”and be safe and take a little bit of what Christ has to offer, but possibly miss out on the greater joy of the overflowing fullness in Christ.

Don’t be a picky eater.

Your hunger will not be fulfilled by binge watching Netflix, working yourself to exhaustion, or busying yourself with other things.

Instead, indulged in the fullness of Jesus.

He’s offering you as much as you want.

One thought on “Picky Eaters”

✨DREAM GUIDE 2020✨ For 2020, God made it clear, this year will be the year of Treasuring and Pondering! This comes from Luke 2:19 which says, “But Mary treasured up all these things and pondered them in her heart.” See in this verse, Mary looks at the fulfillment of God’s Word and treasures it up in her heart. But she doesn’t just treasure it, but she ponders it, meditates on it, and thinks about it! For me, this is a year of God’s promises coming to fruition! So just like Mary, I want to treasure the work of God, but also God Himself!! Read more about this on the blog!! Link in bio!!
🥳 HAPPY NEW YEAR 🥳 Here’s to the next year, decade, and forever with you!! Thankful God worked our stories together in this decade so we could be together for the decades to come!! ☕️ Cheers to what all God has in store for us as we continue to grow in Him! ✨2️⃣0️⃣2️⃣0️⃣✨
It was ICE cold, but the company made it nice and WARM! ❤️🎄🥶
✨Feeling like a Disney Princess today!! ✨ Thank you so much Ashley for being THE best wedding dress extraordinaire!! Can’t wait to say I DO!! 💍👰🏼 #beopulent #sayyestothedress
Wedding planning has been so much fun!! Can’t wait for June 20, 2020!!!! ❤️👰🏼🤵🏼❤️
🍂 Happy Thanksgiving!! 🍂 • In this season of life, God has demonstrated so much love and care towards me. His forgiveness and blessing despite my sinfulness has shaken me to the core. God gives good gifts, but none of us deserve any of them. So what does that communicate about God? His steadfast love for us. • In this new season of life, I’m continuously blown away by God’s steadfast love for me! I look at Alec and the GIANT blessing he is. I don’t deserve Alec, he genuinely is a gift from God. And God is using Alec to teach me about God’s love. • So this thanksgiving, I’m thankful for the way God loves. Sometimes His love looks like waiting and sometimes it looks like receiving, but regardless God’s love is steadfast. His love is not dependent on the gifts we receive because we don’t deserve them!! However, love is His character. He is love. • “Let them thank the LORD for his steadfast love.” Psalm 107:8