When I was in Ecuador this past summer, we went to this little park with different rides and activites. One of them was riding this big swing over the side of a mountain. Ecuador is the home of the Andes Mountains; it’s absolutely breathtaking, but this also means the mountains reach around 16,000 feet above sea level. So riding a swing over the side of a mountain, sounds a little unsafe. Let’s be honest, it probably wasn’t the safest idea considering the park was only $1 to get into, the swing was duck-taped together, and Ecuador doesn’t exactly have OSHA regulating the safety of these different rides. BUT I got on the swing!

Since we are about 16,000 feet above sea level, you’re basically in the clouds. So it’s not uncommon for the mountainous view to be veiled with clouds and that’s exactly what happened when we went to the park. If it hadn’t have been for the cloud, I probably wouldn’t have swung out over the mountain, but I braved up and got on the swing.

Even though I couldn’t see the view, I still got pretty high above the ground—higher than any swing I’ve been on here in the States—and it’s scary. I held on so tight. With what seemed unsfe, I felt I made the swing safer by holding on. I thought I would have a better chance of surviving if I death-gripped the sides in case the duct-tape broke. It gave me a sense of control in the midst of something that felt so unsafe. Of course I had a friend taking pictures because I was only going to ride the death trap one time and wanted the fun to be captured. 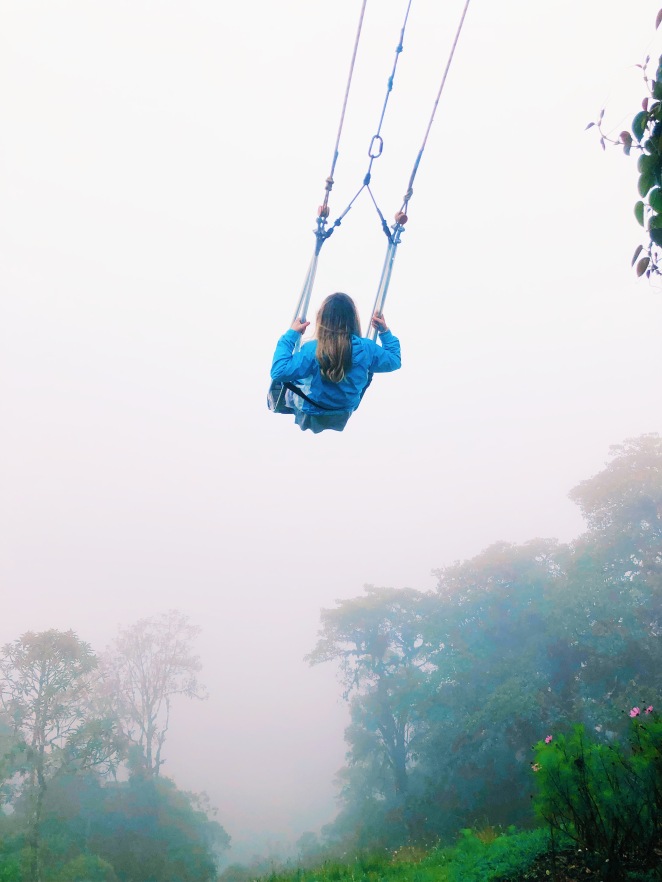 After I got off the swing, I looked through all the photos. You could clearly see the death-grip in the pictures. Meanwhile, the rest of our team got on the swing to enjoy their own ride—don’t worry, everyone made it off the swing alive. But I was captivated by watching them. Those of us from the States had a similar reaction to mine; we all held on for dear life. However, when our translators rode the swing, there was an enjoyment. They trusted the process and knew it was going to be okay so they weren’t afraid to let go. I remember one translator in particular, Patricio, having a picture of him on the swing with the biggest, freeing smile with his hands in the air completely enjoying the experience.

It hit me—I want that picture.

I got back on the swing for a second time—this time wanting to let go. There was still a little fear there—afraid of the unknown, unsure of what the outcome would be—but I wanted that freedom because that freedom produced joy. I had already survived once holding on, but I didn’t get to experience the joy. I watched others freely let go, and completely embrace the opportunity to be free. I wanted that too.

Sure enough, I let go! I have the picture to prove it. And on top of that, I’m here to tell you about it. That fear didn’t diminish completely, but I knew I would be okay because of my first experience and because of those who had gone before me. I surrendered that death-grip to expereince the freedom producing great joy.

Immediately after the ride, I looked through the pictures, comparing the two photos. The first one with a death-grip and the second with a complete joy.

And it hit me–I do this exact same thing with God.

I can’t tell you how many times God has called me to get on a swing. He calls me to trust Him on the journey and to fully surrender—to let go—and embrace the journey. And when I’ve approached that unknown, I’ve held on with a death-grip thinking my hold on things helped the situation. I thought my control of that swing made the outcome better. I thought I would have a better chance of surviving whatever God was calling me to if I death-gripped it. It gave me a false sense of control in the midst of something that felt so unsafe.

But when I looked at those pictures of me on the swing, I learned that keeping a death-grip is absolutely robbing me of the freedom and joy I could experience along the journey God has called on my life. When I hold on and try to remain in control, I’m not demonstrating the freedom Christ has to offer.

Just like me riding the swing, I had to remember that I was okay the first time and others had gone before me and were free so I could trust it.

The same is true in our spiritual lives.

Sometimes all it takes to let go is remembering that God had you the first time.

Sometimes all it takes is others modeling what that letting go looks like in order for us to experience freedom in Christ.

Here’s what I know to be true: if we continue to death-grip our life swing, we are going to miss out on the joy filled freedom of life God has called us to experience. We don’t need to hold on tight, but rather freely surrender to the unknown, knowing God is there. Knowing He is not some duct-taped swing that could crash, but rather He holds us with His righteous right hand. He doesn’t let go of us. He carries us and brings us through the unknown territory whether it’s veiled or revealed.

fear not, for I am with you; do not be dismayed, for I am your God; I will strengthen you, I will help you, I will uphold you with my righteous right hand. –Isaiah 41:10